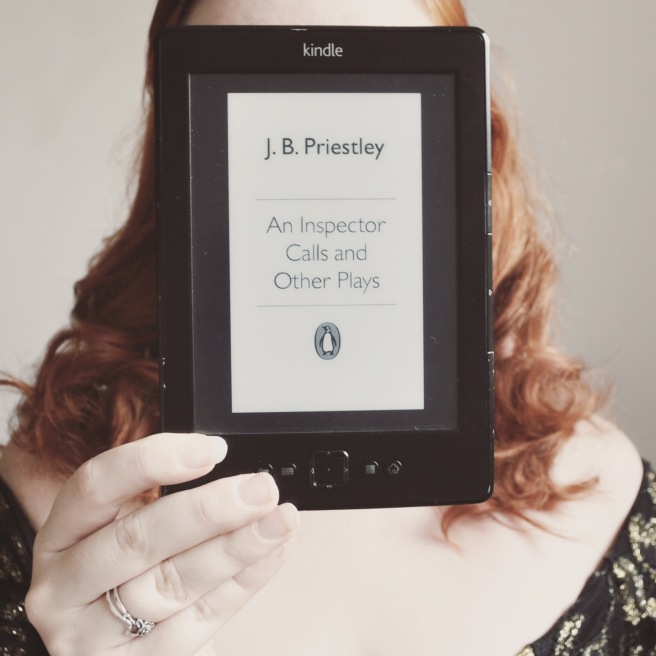 And so we have my final Blogtober post, and thirtieth review of the month. I chose An Inspector Calls for my Halloween post despite it being neither a book nor a horror story. It’s a ghost-story play, and for various reasons it is my favourite. I’m hoping to go and see it in London with my brother at the end of the year (I haven’t asked him but the dynamic of big sister little brother is that I can make these kinds of decisions).

First performed in 1945, An Inspector Calls is set in an upper class drawing room owned by the Burlings in 1912. The family are celebrating their daughter’s engagement and talk about the importance of looking out for themselves in life and business. The evening is interrupted by an inspector who brings news of a young woman’s suicide and slowly reveals the involvement of the people in the room.

I describe An Inspector Calls as a ghost story because it’s heavily implied, but never confirmed, that the supernatural is involved in the experience. The inspector’s name is Goole, and he plays a sort of omnipresent part in the play. I think the degree in which he is interpreted as a ghostly visitor depends on the production (the recent televised BBC adaptation went very full on with the ghost theory).

For me it’s a bit more than just a ghost story or a drawing room drama, which I have alluded to in the past. It’s quite a bold comment on how the upper classes treat the working class, for 1945, but also how our behaviour has consequences far beyond what we expect. 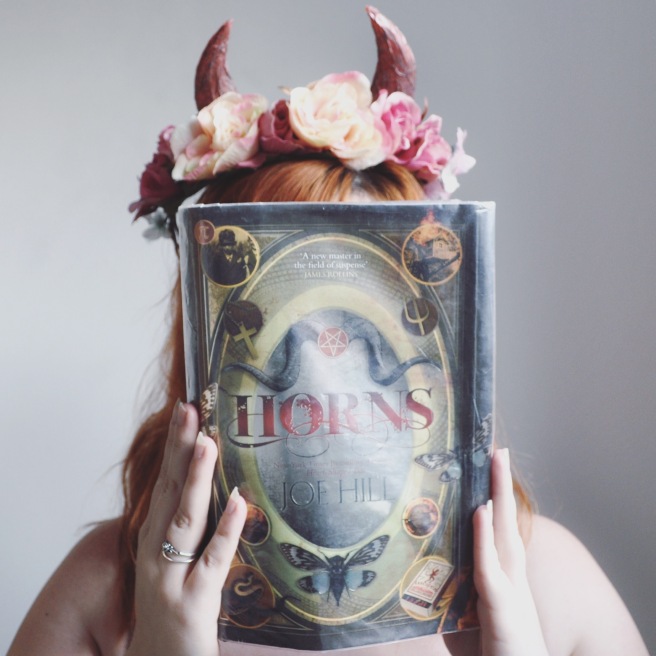 For day thirty of Blogtober I’ve picked Horns, written by the son of Stephen King, to continue my horror theme!

In Horns Ig wakes up after a debaunched night out to find that he has grown a pair of horns. With then comes devilish powers, including the ability to discover people’s worst thoughts and desires. He uses his newfound abilities to hunt down the man who raped and murdered his girlfriend, a crime that he is largely believed to have committed.

Horns is clearly a slightly bizarre book, there’s a lot of devil undertones and quasi-religious symbolism. And snakes. Lots of snakes. Where most of the characters suffer an almost demonic possession by Ig’s powers  there’s not much in terms of character development; it’s a fantasy-horror revenge story first and foremost. No one learns anything, people suffer in weird and fantastical ways, but it’s still good!

I got my Ninja Book Swap parcel today (it had been delivered to my neighbour, I don’t just have a really keen postman) and it was so perfect I almost can’t believe it.

I got this adorable mug to drink tea from when I’m reading (which bears more than a passing resemblance to my own elderly bunny, Bambi). 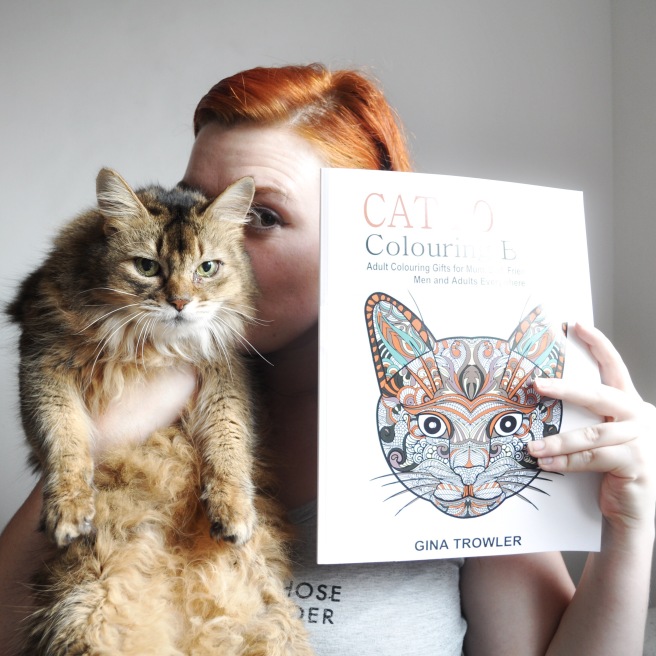 I also got this cute Cat Lovers colouring book and some pencils and clearly I love cats. And colouring.

And finally a copy of The Art of Being Normal which has been on my wishlist for ages. I’m very excited to read it!

I’m continuing along the horror novel vibe for day twenty nine of Blogtober (only two more days to go! I’ve nearly made it!) with Carrie. By wonderful coincidence The Little Contemporary Corner are running a Halloween Carrie Readathon so I’ve started reread of it today! I’m only on page thirty eight though so this will all be from memory when I read it eleven years ago.

Carrie was the first horror book I ever read, back when I was doing my GCSEs. I remember liking the format; the slightly disjointed combination of essays, book excerpts, interviews, reports and narrative that give away that something bad happened, but never the specifics until the end. Carrie’s powers aren’t a twist, but the true scale of the devastation she causes isn’t apparent until the last pages.

It’s not the most terrifying of Stephen king’s book, being his very first, but it’s still a good one and I’m enjoying re reading it! 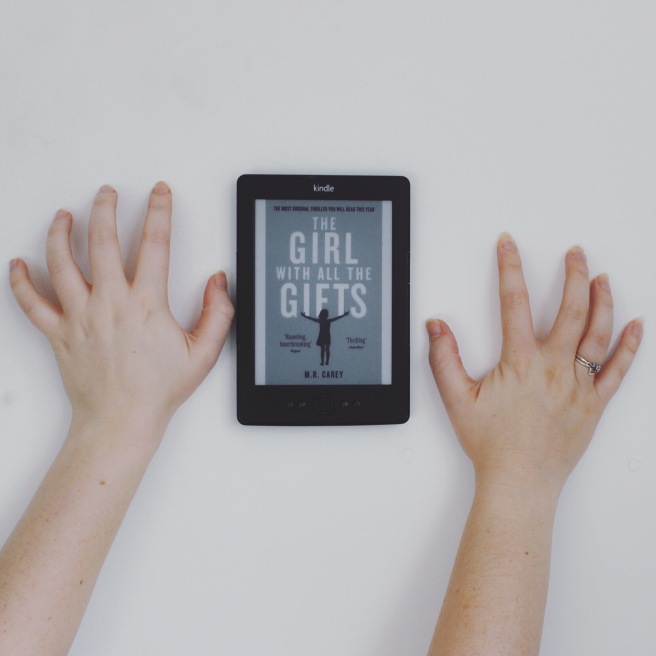 I’ve picked another misunderstood monster for day twenty seven of Blogtober. The Girl With All The Gifts is a twist on the standard zombie story, set twenty years after a fungal disease infects humans and turns the majority of the population in to mindless, flesh eating ‘hungries’.

The story revolves around a group of children confined within a military camp. Every morning Melanie is visited in her cell, strapped in to a wheelchair and taken to a classroom to be taught by her favourite teacher, Miss Justineau. Melanie is a hungry that has retained her human mental capacities and has a genius level IQ, the military base is a front for a scientist that wants to dissect her and the other children to find a cure. When the base is attacked the adults must work around their fear of Melanie in order to save themselves.

It’s a fantastic book with some really great characters. The relationships between the adults and Melanie is one of the best parts of this book, not the zombie plot, and the ways in which they are charmed by her and learn to face their fears is what makes this book what it is.

Another classic for day twenty seven of Blogtober and now I’m getting closer to Halloween I’ve picked one of the original science fiction horror novels.

I really loved Frankenstein when I read it at school. I think it was partly the teenage me loving the idea of a young woman writing one of the first science fiction novels, but it’s also a beautifully written book. I loved the middle section where the monster narrates and talks about life as an outcast. In fact I loved the structure as a whole; the idea that this scientist is found near death in the snow and talks about how he is hunting down the beast he created. It’s very gothic, obviously.

I first read War of the Worlds about eight years ago when I was on holiday in France and found a copy in the house we were staying in. Up until that point I’d only seen the Tom Cruise film. It was a lot better than I was expecting.

I feel like I need to cheat this review because I am fairly drunk but I should persist.

I really liked this book.*

*edit: I probably should expand on this now. War of the Worlds does a really good job of being creepy and terrifying without showing the aliens fully at every turn. There’s a lot of suspense when the narrator is hiding out during his journey and the scene where he takes cover with a vicar who has been driven mad with fear is amazing.

The ending I also think is really clever. The idea that aliens would be wiped out by failing to take our common illnesses in to account is quite forward thinking for a Victorian novel. It’s also a hopeful thought should aliens ever try to take over.

Something I’ve found out quite recently about this book is that HG Wells hated the original illustrations and edited his description of the Martians to reflect how ridiculous he thought that they looked and to basically bitch about the illustrator. Which is brilliantly petty,

Slaughterhouse Five is a fairly incredible novel because it is in equal parts sci fi with five travelling aliens and memoir about being a prisoner of war and the bombing of Dresden by allied forces after World War Two. Billy Pilgrim follows Kurt Vonnegut’s path to Dresden. Kurt Vonnegut even had a cameo as a fellow prisoner of war- in a paragraph that always gets me;

An American near Billy wailed that he had excreted everything but his brains. Moments later he said, ‘There they go, there they go.’ He meant his brains.

That was I. That was me. That was the author of this book.

The story jumps around quite a lot, Billy bring unstuck in time and all, and leaps from Germany during the war to a ‘people zoo’ on the planet Tralfamadore.

One of my favourite parts of the book though, is the first chapter where Kurt Vonnegut tells the story of how the book’s full title, Slaughterhouse Five or The Children’s Crusade; A Duty Dance With Death, came about. In it he talks about the anger his friend’s wife had for war, and war novels that glorifies babies going to slaughter.

It’s a short but fantastic book and it really is one of my absolute favourites.

This isn’t the first Kurt Vonnegut book on my Blogtober list, nor will it be the last (there’s another one coming tomorrow) but it is the first complete novel of his that I’ve written about. Which is surprising seeing as he is one of my all time favourite writers. I’ve put it after Brave New World because both involve the question of what it means to have a ‘civilised’ society and whether science is the true measure of what it means to progress as humans, as well as utopian projects as a means of control.

Cat’s Cradle revolves around the narrator’s obsession with the- fictional- co-creator of the atomic bomb, Felix Hoenikker, who also creates a new structure of water called ice-nine that restructures any water molecules around it in to ice. While researching his book John, the narrator, ends up on an island where the inhabitants all follow a religion called Bokonism, which is banned and punishable by being impaled on a hook.

It’s a very weird premise, but then all of Kurt Vonnegut’s books are. Bokonism is a fabricated religion made up by a cynical man, but it comes across as twee and weirdly philosophical. The ‘Bokonisms’ sum up the book pretty well; cynical, but deceptively quotable and meaningful. One of my favourites is a prime example:

I have issue with how the people native to the island might be interpreted- indeed how they’re written- whilst there’s that juxtaposition of the western world creating atomic weaponry (and just how ‘civilised’ can we really call ourselves) and people living under a small-scale autocracy… I feel like, if published now, that kind of juxtaposition would, quite rightly, upset people and potentially harm them. So, read with some degree of caution, as with many ‘classics’.

I got this lovely little book on Netgalley fairly recently and read it while I drank my cup of tea in my friend’s armchair yesterday. It’s very short, but very sweet.

Hello Me, It’s You is a collection of letters compiled and edited by Hannah Todd from anonymous twenty-somethings to their sixteen year old selves. Each one is heartfelt and sometimes painful as they talk about the things they’re about to go through and how they come out the other side. There’s something I think most people will relate to and the letters being anonymous and therefore gender less gives a relatable, rather than alienating, quality to each of them.

Some of them felt like something I could write to sixteen year old me, others were outside my realm of experience. But there’s still something quite lovely about the optimism and hope of people thinking back on their early adulthood as something to learn from and reading the results.

My Tweets
A Novel Haul
Create a free website or blog at WordPress.com.