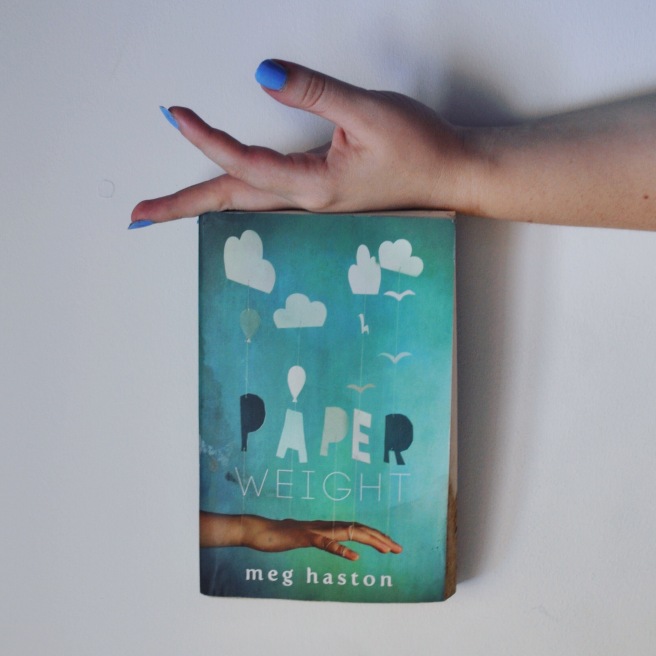 I was in some ways relieved when I read Paper Weight. There’s always a danger, I think, that a story about mental health and mental illness is going to be disappointingly… Offensive? I think offensive is the word. It seems to be such a lazy trope within fiction (mainly tv and film, I will admit, but books aren’t always exceptions) to use mental health as a gratuitous plot device and not explore it in a meaningful way. So reading Paper Weight was a a great experience in that sense.

The narrator, Stevie, is flawed as a character. Not because she’s mentally ill, but because she’s a lost teenager dealing with trauma. She grows as changes and learns from her mistakes- of which she makes several- and she remains flawed, but trying, like an actual person. Her mental health problems aren’t written as something to overcome, as such, as if she can throw off the shackles of an eating disorder and be a ‘normal’ girl again. But we see her fighting against, and eventually working with, the people around her to get to a place where she help herself.

I liked the inclusion of LGBT relationships and the confusion of figuring out sexuality as a teenager. Again it didn’t feel like a gratuitous plot device. It was thought out and included for a reason, not as a token. I also liked the underlying message that we can’t know the struggles of others- that judging someone on outward appearances, or comparing experiences and traumas, is a recipe for disaster. It’s a lesson we learn alongside Stevie as she watches things fall apart and come together again.

I can’t speak for whether the nature of inpatient life was captured well. But it felt like a sympathetic portrayal. It wasn’t glamorised or glorified, nor did the characters feel like stereotypes or caricatures. It was a good read. 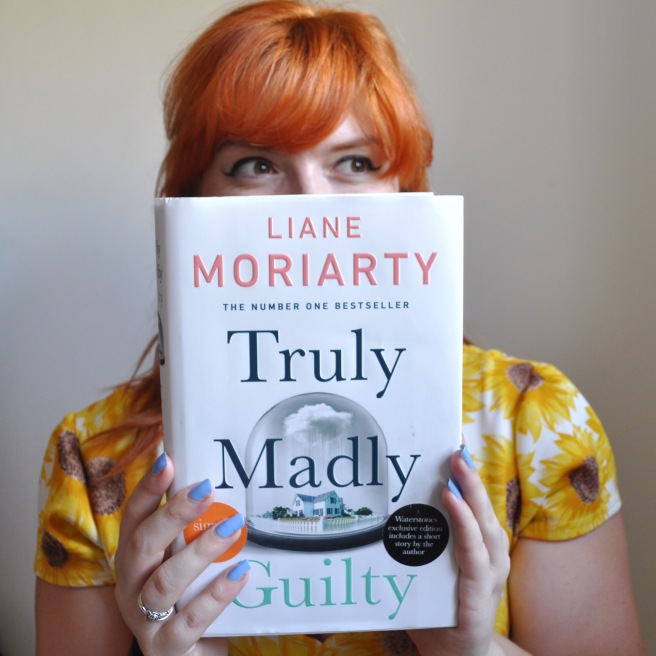 I truly have made it clear how much I love Liane Moriarty in the past. When I last reviewed one of her books in February I was convinced that I would be waiting years for the next one. So the noise I made when I found this signed copy in Waterstones Bluewater was undignified but necessary.

Anyone looking to write something with a decent amount of tension and twists should consider her books required reading. Once again she’s managed to write a book that gives nothing away on the road to the twists but it still compelling. I don’t care that I can’t figure it out, it isn’t a mystery, because I know that very single lose thread will be tied up at some point. I have complete faith as a reader that all my questions will be answered and that is a rare skill in a writer I think.

Truly Madly Guilty takes place alternately at a BBQ and two months later. Something happened. We just don’t know what. Clementine and Sam’s marriage is in trouble because of it, Enrika and Oliver are dealing with her therapy sessions after the fact and Tiffany and Vid are trying to figure out what’s wrong with their daughter and their neighbour.

There’s a whole host of issues at play; the delicate balance of a good marriage, fertility problems, child safety, toxic childhood friendships and the importance of being open with the people around us. I can’t even say much more because it would ruin the gorgeous way the drama unfolds.

I loved it. Of course I loved it. Liane Moriarty is flawless and may she never stop writing ever.

There’s a sweet and only vaguely relevant story behind the photo I took for this post*. I love the idea of postcards, so a sweet YA involving them is right up my street.

What I liked about The Geography of You and Me was that it wasn’t over the top. It was a believable, slow burning romance despite being based- if not on the idea of love at first sight- on the idea of forming an immediate bond with another person. It doesn’t build up dramatically like a modern Romeo and Juliet, even if Lucy and Owen come from very different backgrounds, but their romance is always there in the background. Even if it up and down.

I really liked the ending. Without giving too much away it was somehow both open and understated but satisfying. It felt like there’s more to Lucy and Owen’s story, but then they’re teenagers so leaving it open felt far more realistic than having a clear cut happily ever after.

The Geography of You and Me is a cute, not-overly-sickly teen romance. I really enjoyed it.

*Postcards are brilliant, in my opinion. One of my favourite weird things to do is use Touchnote, a postcard photo app, to send ugly photos of myself with weird caption to my best friend. Like a postal Snapchat. But they can also be very cute. The written-on postcards in the photo above (the older ones that I’ve turned over) are two of a collection of maybe fifty postcards I have that my Grandad sent my Grandma when he was abroad with the RAF. Most of them are dated in the early 1950s, so I guess romance by postcards is timeless!

I probably picked this one up for the complete wrong reasons. It was part of a ‘3 for £5’ deal at The Works (which is my go to place to get cheap booky goodness) and The Returned caught my eye because I recently binged the TV series on Netflix. Confession: I binged the US version which sadly got cancelled in a cliffhanger. I’ve been told that the French original is far superior, but for me TV is a background noise and trying to watch two series of a French subtitled show just to find out what happens is not appealing to me.  Which is how I came about reading a 450 page novel just to find out the ending in the last 50.

So, The Returned is based on the screenplay of the original French series and I definitely think that the setting of a French town added an extra creepy feel. The story worked well with the culture- the distrust of religious characters among the more secular ones felt more at home in a country with such a deep separation of the two. And something about the names being so distinctly French made me think of the older towns I’ve visited in France and how eerie those places would be in this situation. The image of the drowned old village that’s a constant presence beneath the damn was very striking.

Despite being so long it was a much quicker read than I was anticipating and I pretty much read it in a day. Admittedly I did very little else, but it was a fairly light read given the subject matter. The characters were an ensemble, so none of them were as fleshed out as they had the potential to be; we got glimpses into their lives before and after the event but a lot of stuf happens in a short amount of time. I think to have fleshed everything out in full would have required a second book, but I didn’t feel like it was missing too much in terms of character and story development in spite of this.

This was definitely the most stylish zombie novel I’ve ever read. In fact calling it a ‘zombie’ novel might even be a bit misleading- the effects of being undead are subtle and the main focus is the emotional impact that the returned have on the town. I probably still won’t ever get around to watching the French series, but I’m glad to have finally found out the ending!

I’ve had my eye on this one for a while, having originally thought it was some sort of cookbook or real life story that I might relate with as a non-meat-eater. Instead it was a beautifully written comment on South Korean social mores, the agency of women and mental illness.

The book was spilt into three parts, each from the point of view of a different character but revolving around Yeong-Hye after she decides to become vegetarian. Her husband, brother-in-law and sister all give an insight into her declining state of mind after she is haunted by gruesome dreams and becomes more and more convinced that she must become a tree.

The format was a bit weird for me. Not I enjoyable… But somehow incomplete. I felt like the story didn’t finish, like there was another part that should be to come, but at the same time the narrative of the major character was undoubtably at an end. It was a strange sensation, like I was never going to be able to piece together the ending but could only assume the worst.

It was interesting reading this from a western perspective; the men in Yeong-Hye’s life treat her cruelly and abandon women when their pride takes over, yet it feels as though their social standing is still paramount. Yeong-Hye’s decision to become vegetarian is met with violent protest- which is a massive contrast to my experience of becoming one aged thirteen.

My aim this year was to read books by authors from a wider range of of cultures and backgrounds and I’m really glad I finally picked up The Vegatarian.

I was really, really torn on this book. On the one hand I really wanted to enjoy it… And as a whole I think I did… But on the other hand I spent a good portion of it wondering if it was meant to be this weirdly pretentious.

Nod had a really good premise. Suddenly, everyone in the world stops sleeping- with some very rare exceptions- and things descend into chaos. The blurb tells us that after six days of no sleep psychosis sets in and after four weeks the body will die. So of course things go downhill quite rapidly.

I loved the beginning, and I absolutely loved the ending… It was the bit in the middle I couldn’t quite get my head around. The narrator is a writer, and his unpublished manuscript about obsolete phrases and words becomes the basis for a semi-cult that springs up in the chaos. For me, the leap between that book and the psychotic leader’s ramblings was a bit too great. Especially when I felt like the narrator (a Sleeper) seemed to be understanding what on earth was going on. But the story redeemed itself when those bits weren’t involved.

Paul, the narrator, wasn’t that likeable. And I didn’t particularly care about him and his non-sleeping girlfriend (neither did he, by all accounts) but I didn’t feel like I needed to like him. He was a pretentious arsehole, but who says pretentious arseholea can’t be the ones to survive the end of the world?

Nod is the second Canadian dystopia I’ve read (the first being the fantastic Station Eleven) so maybe I’m comparing it too harshly to what I’ve read before. I didn’t not enjoy it, and if you like dystopias I think it’s worth a read (or, if you’re a pretentious arsehole, maybe you’ll feel at one with Paul) but I possibly wouldn’t read it again.